Computer keyboards in hospitals can be more contaminated with bacteria than emergency departments, a new American study has shown. The study conducted at Henry Ford Hospital in Detroit found that keyboards located in triage and registration areas were more contaminated with bacteria than those in other areas of the Emergency Department
www.ayushdarpan.com Dr Navin Joshi at NPAFc पर 10:19 No comments:

On the occasion of the World Environment Day, the Organising Committee Commonwealth Games 2010 Delhi along with the Department of Environment, GNCTD, organised a Sustainable Transport Rally which included bicycles, electric cars and electric bikes.

The Organising Committee Commonwealth Games 2010 Delhi released the Green Games monthly e-newsletter and the Department of Environment, GNCTD, also released its 2010 State of the Environment Report.
There were more than 200 participants and the rally proceeded in two batches. The first batch was a Cycle Rally that was flagged off from the Organising Committee headquarters by Shera, the Games mascot. Special DG Sudhir Mittal was also present at the flagging off. The second batch was a rally of electric cars and electric bikes flagged off by the Chief Minister Sheila Dikshit from her residence.
Both the rallies converged at the NDMC Commonwealth Garden located at Africa Avenue for ceremonial plantation. Present during the occasion along with the Chief Minister were Director General, TERI, and Chairman, IPCC Dr. R. K. Pachuari, Minister of Health and Family Welfare Kiran Walia, Chairman, NDMC Parimal Rai, Director General, OC CWG Delhi 2010, V. K. Verma and other dignitaries who also addressed the audience on the occasion.
Verma reiterated OC's initiative and commitment towards making Delhi 2010 the first ever Green Commonwealth Games. He also appreciated the Delhi government's initiatives towards sustainable transport.
Dikshit emphasised and appealed to the citizens of Delhi to make the city green and clean. She said "While Delhi has achieved the status of a green city in India it has also got international recognition as of the greenest cities in the world. It is now time for Delhi to also become a clean city." (ANI)

AYUSH DARPAN WILL HELP IN HEALTHY JOURNEY OF KAILASH MANSAROWAR 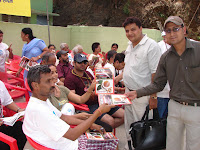 AYUSH DARPAN  will help for maintaining Health of Kailash Mansarowar piligrims.Magazine is distributed to all 49 members Kailash Mansarowar Pilgrims who are on the way.They stay for a short time in Pithoragarh TRC.They appreciate our effort and curiously go throuh the magazine.This effort has appreciated by all Media person present to cover the event.
www.ayushdarpan.com Dr Navin Joshi at NPAFc पर 18:54 No comments:

Study Finds Cause and Effect Link Between Smoking and Depression

Smoking can increase depression risk, according to a new Kiwi study. The study, conducted by Otago University, suggests nicotine-dependent people are more than twice as likely to get depressed as those who don't smoke. Researchers from the university's Christchurch Health and Development Study quizzed over 1000 people about their smoking habits and symptoms of depression at ages 18, 21 and 25 to come up with their conclusion. "Our findings are consistent with the conclusion that there is a cause and effect relationship between smoking and depression, in which cigarette smoking increases the risk of developing symptoms of depression," Stuff.co.nz quoted lead researcher David Fergusson, as saying. He added: "The reasons for this relationship are not clear. However, it's possible that nicotine causes changes to neurotransmitter activity in the brain, leading to an increased risk of depression." The study has appeared in the British Journal of Psychiatry. Source-ANI
www.ayushdarpan.com Dr Navin Joshi at NPAFc पर 10:49 No comments:

Sri Lankan Minister of Indigenous Medicine,Tissa Karaliyadde emphasized the need of utilizing the currently available resources at the optimum level in order to advance the indigenous medicine system in Sri Lanka. Speaking at the launching of findings of Ayurvedic studies, Minister Karaliyadde said that his Ministry has explored the possibility of establishing authentic Traditional Sri Lankan Health Promoting Centers of excellence in Australia and to promote Sri Lankan medical practices in several European countries. Mr. Karaliyadde asserted that the Government is taking all possible steps to uplift the local Ayurvedic industry and expand its service to other nations through several promotional activities. The launching ceremony was held at the Bandaranayake Memorial Ayurvedic Research Institute in Navinna. Borella Ayurveda Teaching Hospital, Ayurveda Research Institute, Ayurveda Drugs Corporation, Ruhunu University and Central Provincial Council in collaboration engaged in the research activity and the Department of Ayurveda has spent Rs. 3 million for this project. The research were based on the topics of diabetes, male infertility and dermatological disorders. The researchers also have discovered several treatment methods for diseases and also stress the necessity of cultivating rare varieties of herbs to cater to the growing demand.
visit-http://ayushdarpan.com
www.ayushdarpan.com Dr Navin Joshi at NPAFc पर 10:46 No comments: