A Nyasa yoga healing training was organised on Saturday at the Institute of Healing and Alternative Therapy with a special programme on promoting brotherhood, peace and harmony on the occasion of Gandhi jayanti.
The participants included the office goers, professionals, teachers including women, and students. Founder director of the Institute and Reiki grandmaster Dr B P Sahi besides other healers imparted Nyasa yoga healing training. Dr Sahi said Nyasa healing was an ancient practice of healing in India developed by the ancient sages. He said Nyasa healing was important for health, prosperity and harmony. It also enables the students to concentrate on their studies, he added.
www.ayushdarpan.com Dr Navin Joshi at NPAFc पर 19:09 No comments:

Cancer can be Fought With Turmeric 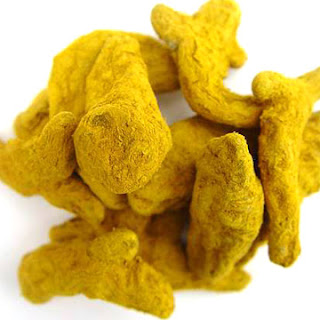 Chemotherapy-resistant cancer cells, UK scientists say, could be destroyed by a common kitchen spice used in curries - the humble turmeric.
Researchers at the University of Leicester have been using curcumin - an extract of root turmeric, commonly used to spice up curries - to target chemo-resistant cells.
The aim is to use the extract in colorectal tumour tissue.
"Following treatment for cancer, small populations of cancer cells often remain which are responsible for disease returning," the Daily Mail quoted lead researcher Dr Karen Brown, as saying.
"These cells appear to have different properties to the bulk of cells within a tumour, making them resistant to chemotherapy.
"Previous laboratory research has shown that curcumin, from turmeric, has not only improved the effectiveness of chemotherapy but has also reduced the number of chemo-resistant cells, which has implications in preventing the disease returning."We hope that our work will lead to a better understanding of the mechanisms through which curcumin targets resistant cells in tumours. "It should also help us identify those patient populations who are most likely to benefit from curcumin treatment in the future," Brown added.

The Pune chapter of BAMS Graduates Association of India has condemned a recent release by Medical Council of India that said “candidates registered in Ayurveda have no right to practice in allopathy.” BGA president Suhas Joshi said, “BAMS graduates are legally allowed to practice in Mahasashtra. In the 1999 amendment in Food and Drug Act of 1945, individual states were asked to frame their own laws to decide upon whether BAMS graduates can practice in alloapthy or not. Maharashtra government passed an order regarding the same. Other states should also follow the same.”
Joshi added, “Whenever there is reference to bogus doctors or quacks, Ayurvedic doctors are cited as examples. Organisations like MCI are responsible for this. BAMS graduates get training in allopathy medical sciences also including pharmacology. This fact is always ignored.” The members pointed out that they may initiate legal action if the MCI does not respond. Subhash Ranade, president of International Ayurveda Academy, said, “The ancient science Ayurveda is being given step-motherly treatment by the government. The recently-formulated National Council for Human Resources in Health does not have any representative of AYUSH (Department of Ayurveda, Yoga & Naturopathy, Unani, Siddha and Homoeopathy ). This is really unjust.”
www.ayushdarpan.com Dr Navin Joshi at NPAFc पर 08:01 No comments:

New research has indicated that our bodies produce a protein that lowers blood pressure.
Increasing the level of the P450 protein causes the creation of molecules called EETs, which lower blood pressure, according to Craig R. Lee at the National Institutes of Health's National Institute of Environmental Health Sciences in Research Triangle Park, N.C.
"In particular, we hope that targeted-use of these new therapies in individuals with a poorly functioning P450-EET system will ultimately prove to be an effective treatment for patients with high blood pressure," said Lee.
These findings may influence drug development for other diseases, such as coronary artery disease, stroke, and cancer.
Lee and colleagues discovered this new protein using genetically modified mice with human P450 present in the cells. The scientists found that the P450 caused the mice to produce EETs, which in turn caused the relaxation of blood vessels and lower blood pressure.
When the mice were exposed to substances that increased blood pressure, the P450 mice had lower blood pressure and less damage to the kidneys than the normal mice.
"Whether you're a Type A personality, overweight and out of shape, or genetically wired to have high blood pressure, this research offers real hope," said Gerald Weissmann, Editor-in-Chief of The FASEB Journal.
"Having discovered a pivotal role for the P450-EET system, scientists can now develop a new class of drugs not only for lowering blood pressure, but also for preventing strokes and heart attacks."
The study is published in the October 2010 print issue of The FASEB Journal.
Source:ANI
www.ayushdarpan.com Dr Navin Joshi at NPAFc पर 08:00 No comments:

Prince Charles’ wife Camilla, Duchess of Cornwall, is being given some truly royal treatment at a spa on the outskirts of Bangalore. Apart from Ayurveda and naturopathy therapies, she will also get to experience the benefits of yoga and meditation.The 63-year-old checked into the Soukya holistic health & ayurveda centre in Whitefield early Tuesday and will undergo holistic treatment during her four-day stay.“Camilla arrived here from London with a 15-member group for a four-day stay. She is impressed by our facilities, including the holistic treatment for toning up her health,” Soukya spokesperson Mary told IANS.The state protocol office earlier confirmed that Camilla landed at the Bangalore international airport on a British Airways flight and was escorted to Whitefield, about 20 km from the city, under tight security.“Though Camilla is in good health, she preferred to rest for a while in our presidential suite as she was tired after a long flight. She had a light breakfast and a good lunch especially made for her as per our diet,” Mary said.Holistic health practitioner and spa owner Issac Mathai has drawn up a schedule to rejuvenate Camilla using various therapies under the Indian system of medicine such as ayurveda and naturopathy.“Charles and Camilla are great patrons of integrated medicine. Organic farming and holistic treatment are close to their hearts. We will also give her complementary therapies like yoga, meditation, acupressure and reflexology,” Mary said but declined to share other details of the treatment.Camilla will join her husband in New Delhi Saturday to participate in the inaugural ceremony of the Commonwealth Games 2010 beginning Sunday.“For privacy and security reasons, we are not in a position to share Camilla’s itinerary here. She is expected to spend most of her time at the spa with some of her family members and friends accompanying her,” Mary added.A Scotland Yard team has been stationed in the sprawling holistic centre for Camilla’s security.The noted wellness centre has recently tied up with the London-based Royal College of Integrated Medicine to train western doctors and therapists in ayurveda and traditional forms of Indian medicine.The private spa also hosted the Duchess of York Sarah Ferguson in 1997.
Source:TheIndian News
www.ayushdarpan.com Dr Navin Joshi at NPAFc पर 07:03 No comments:

The Key to Happiness Lies in Doing Simple Things

The Key to Happiness Lies in Doing Simple Things
They discovered that those adults who were happiest in life work just over seven hours a day, enjoy five cooked meals a week, and jet off on two holidays a year.
They also socialize with friends once a week, watch three episodes of their favourite soap opera, and exercise up to four times over seven days.
"Brits aren't after expensive holidays or fast cars to make them happy, but the simpler things in life," the Telegraph quoted a spokesman for the dairy company Yeo Valley, which commissioned the research, as saying.
"Uninterrupted sleep, quality time with the kids and partner were all deemed really important.
"Our lives are busier than ever so managing to fit in a home-cooked meal, catching our favourite soap or gym session can help keep us smiling.
Source:MedIndia

A recent insight has revealed that breast cancer risk is high among close relatives of women diagnosed with early onset breast cancer, which is cancer before the age of 35 years.
Professor John Hopper, Director of Research from the Centre for Molecular, Environmental, Genetic and Analytic Epidemiology at the University of Melbourne, Australia, a lead investigator in the study, said these are surprising and novel findings which could be pointing to the existence of a new cancer genetic syndrome.

"The results suggest there could possibly be undiscovered genes causing breast cancer in these young women, and perhaps other cancers in their families," Professor Hopper said.

Every year in Australia, more than 300 women are diagnosed with breast cancer before the age of 35 years. This is approximately one in 40 of all breast cancers.

In the largest population based study of its kind, scientists studied 2200 parents and siblings of 500 women diagnosed with breast cancer before the age of 35 from across three countries, Australia, Canada and the United States.
After excluding families with mutations in BRCA1 and BRCA2, the two known major breast cancer susceptibility genes, they found that close relatives were at increased risk of not only breast cancer, but also of cancers of the prostate, lung, brain and urinary tract.

To boost the popularity of ayurveda and related fields, the fourth edition of the World Ayurveda Congress (WAC) and Arogya Expo will be held in Bangalore during December 9-13.
Around 4,000 delegates from 42 countries will take part in the Congress. Dr Geetakrishnan, Organising Secretary, said experts from across the world would present around 1,270 research papers. Also, there will be six plenary  sessions wherein 24 internationally-acclaimed speakers will address the gathering, she said.The fourth WAC will showcase as to how ayurveda can provide safe, cost-efficient and effective healthcare for all, especially in case of food and nutrition, primary healthcare, mother and child care and ayurvedic management of chronic lifestyle diseases.Informing about Arogya Expo, Geetakrishnan said the spotlight this year was on India’s traditional and tribal knowledge in healthcare systems. She said there would be around 500 stalls at the expo.