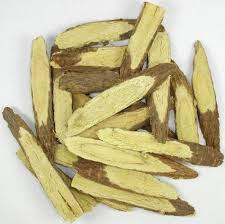 In research published in The Plant Journal, a group of scientists led by researchers from the RIKEN Center for Sustainable Resource Science in Japan have decoded the genome of Glycyrrhiza uralensis, or Chinese licorice, a plant that is important for its use in Chinese medicine and as a natural sweetener.
Chinese licorice, which is closely related to the plant--Glycyrrhiza glabra--used for licorice candy, is an important component of Chinese traditional medicine. According to Kazuki Saito of CSRS, who led the team, "It is incorporated in approximately 70 percent of the 200 major formulations used in traditional Kampo medicine in Japan. Considering that 90 percent of Japanese physicians prescribe Kampo medicine in their practices, it is easy to see the importance of this plant."
The team chose to examine the genome of Chinese licorice rather than other related species partly because it is known to contain the highest concentration of glycyrrhizin, a compound that is associated with the medical properties of the plant, which include anti-inflammatory, anti-cancer, anti-allergic, and anti-viral activities.
To conduct the screening, they chose a strain of G. uralensis kept at the Takeda Garden for Medicinal Plant Conservation in Kyoto. Using a combination of long read and short read sequencing, and by comparing the genome to published sequences of other legume species, they predicted that the plant's genome coded just over 34,000 proteins, a number somewhat higher than the 20,000 in the human genome. They focused in particular on two genetic regions--one coding saponins, which are important plant compounds including glycyrrhizin, and the other producing isoflavonoids, which are also known as medicinal components.
Through the research, the group demonstrated that there is a close conservation of genes between licorice and other related plants such as barrelclover (s species close to alfalfa) and chickpea, showing that legumes use a small number of genes to create "scaffolds" that allow for the production of an enormous diversity of compounds.
Keiichi Mochida, the first author of the paper, says, "Chinese licorice is an important and heavily consumed medicinal plant, and we hope that our work will make it possible to carry out molecular breeding to create strains that will grow sustainably in Japan, and which produce large concentrations of useful compounds such as glycyrrhizin."
According to Saito, "We very much hope that our draft genome sequence will facilitate the identification, isolation, and editing of useful genes to improve the agronomic and medicinal traits of licorice through molecular breeding. There remains much to learn about the immense diversity of plant metabolism, and this research will contribute to further progress in that direction."
The group plans to do further work to examines differences between the genome of G. uralensis and other licorice species, to further deepen their understanding of the production of useful compounds. The work was carried out by RIKEN CSRS in collaboration with a group including Chiba University, Kochi University, and Osaka University.
Source:The Plant Journal
www.ayushdarpan.com Dr Navin Joshi at NPAFc पर 08:47 No comments:

A study of mouse reproductive tissues finds that exposure to isoliquiritigenin, a compound found in licorice, disrupts steroid sex hormone production in the ovary, researchers report. This is the first study to examine the effects of this chemical on the ovary.

Exposure to high levels of the compound, which the researchers call "iso," lowered the expression of key genes involved in hormone production, the researchers found. In particular, expression of a gene for aromatase, an enzyme that converts testosterone to estrogen, dropped by 50 percent or more.
The findings are reported in the journal Reproductive Toxicology.
Though preliminary - more research must be done to determine iso's effects in living animals - the discovery is concerning, said University of Illinois comparative biosciences professor Jodi Flaws, who led the study with researcher Sharada Mahalingam.
"In general, when you start to have lower hormone levels, you could start to have problems with reproduction," Flaws said. "And because estrogen is also important for healthy brains, healthy bones, a healthy cardiovascular system, if the levels are depleted for too long, you could have problems with those systems. We haven't shown that to be the case. That's just a possibility.
"I would say, though, that a 50-plus percent drop in aromatase in humans would be a serious problem for fertility and for other things," Flaws said.
Whole licorice root and purified forms of iso are used in herbal supplements, teas, candies and as flavoring agents in tobacco products. Iso is sometimes marketed to women for the relief of hot flashes or other symptoms of menopause, and studies have found that the root has anti-cancer properties for some types of breast, prostate and colon cancer, Mahalingam said.
The same properties that make iso effective against some cancers also might make it toxic to the normal growth and development of the ovary, Flaws said. Other aromatase inhibitors are already in use in oncology to stop the growth of tumors that respond to estrogen, but doctors warn of potential effects on fertility in women of child-bearing age. Use of iso to inhibit aromatase could have the same effects as other aromatase inhibitors, Flaws said.
"This could lead to a good outcome in certain tissues, depending on dose and timing of exposure," she said. "In the ovary, though, if you reduce aromatase, you're also reducing estrogen, so you could be interfering with fertility."
"Botanical estrogens are quite complex, and different tissues may have differential responses, depending on dosage," said food science and human nutrition professor William Helferich, the director of the Botanical Estrogen Research Center at the U. of I. and a co-author of the study.
The new findings are only the first step in understanding iso's role, if any, in influencing fertility, the researchers said.
Source:UNIVERSITY OF ILLINOIS AT URBANA-CHAMPAIGN
www.ayushdarpan.com Dr Navin Joshi at NPAFc पर 08:43 No comments:

Scientists at Children's Hospital Los Angeles have developed a tissue-engineered model of lung and trachea which contains the diverse cell types present in the human respiratory tract. The study, led by principal investigator Tracy Grikscheit, MD, a pediatric surgeon and scientist at The Saban Research Institute of CHLA, was published this week in the online version of the journal Tissue Engineering.
Lung disease causes more than 200,000 deaths annually in the United States. Although the lung is generally considered slow to respond to disease and injury, it does undergo regenerative processes, most of which are not fully understood. Building an understanding of these processes might lead to harnessing these innate mechanisms to help damaged lungs repair. A first step is a proper three-dimensional model in which the disease process can be studied.
Previously, Grikscheit's lab developed tissue-engineered small intestine (TESI) and showed that this regenerated tissue was functional and contained all of the key components of the native tissue. The Grikscheit lab employed a similar strategy to recapitulate the human lung and trachea, transplanting stem and progenitor cells on biodegradable polymer scaffolds. The tissue that grows from this strategy is termed tissue-engineered lung or TELu.
Transplanting regionally specific lung tissue (proximal or distal) from mice and humans generates TELu with typical location-specific tissue markers such as particular alveolar or air sac cells in the distal TELu or tracheal epithelial cells organized with cartilage and ciliated appendages for proximal lung. TEtrach, or tissue-engineered trachea, grew from the most proximal cells.
"We think that understanding lung regeneration in this model will allow several steps forward," said Grikscheit, who is also a tenured associate professor of Surgery at the Keck School of Medicine of the University of Southern California. "For example, advanced stages of disease can be studied with TELu that would be impossible to fully understand in our patients. Likewise,we can more quickly apply many more therapies in this model in order to - hopefully - deliver future human therapies."
Source:CHILDREN'S HOSPITAL LOS ANGELES
www.ayushdarpan.com Dr Navin Joshi at NPAFc पर 23:42 No comments: 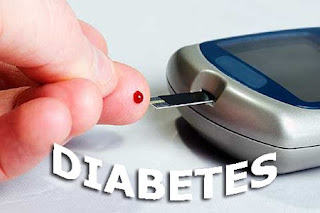 A research team from Helmholtz Zentrum Munchen, partners in the German Center for Diabetes Research (DZD) has found that type 1 diabetes can be easily predicted by the presence of certain proteins in the blood of children.The study findings was reported in the journal Diabetologia.


‘Presence of certain proteins in the blood serves to be a warning sign for emerging type 1 diabetes in children.’

The work was based on two large studies that are intended to explain the mechanisms behind the development of type 1 diabetes  . The study participants are children who have a first-degree relative with type 1 diabetes and who consequently have an increased risk of developing the disease due to the familial predisposition. This autoimmune process does not develop from one day to the next, however: Often the young patients go through longer asymptomatic preliminary stages that see the formation of the first antibodies against the child's own insulin-producing cells in the pancreas; these are the so-called autoantibodies. Biomarkers that indicate whether and when this is the case and how quickly the clinical symptoms will appear could significantly improve the treatment of patients at-risk.A team of scientists, led by Dr. Stefanie Hauck, head of the Research Unit Protein Science and the Core Facility Proteomics, and Prof. Dr. Anette-G. Ziegler, Director of the Institute of Diabetes Research (IDF) at the Helmholtz Zentrum München, analyzed blood samples from 30 children with autoantibodies who had developed type 1 diabetes either very rapidly or with a very long delay. The researchers compared the data with data on children who displayed neither autoantibodies nor diabetes symptoms. In a second step with samples from another 140 children, the researchers confirmed the protein composition differences that they found in this approach. New biomarkers for diagnosis"Altogether, we were able to identify 41 peptides** from 26 proteins that distinguish children with autoantibodies from those without," reports Dr. Christine von Toerne, a scientist in the Research Unit Protein Science who shared first authorship of the work with Michael Laimighofer, a doctoral candidate in Jan Krumsiek's junior research group at the Institute of Computational Biology. Striking in their evaluations: A large number of these proteins are associated with lipid metabolism. "Two peptides -- from the proteins apolipoprotein M and apolipoprotein C-IV -- were particularly conspicuous and were especially differently expressed in the two groups," von Toerne adds. In autoantibody-positive children, it was furthermore possible to reach a better estimate of the speed of the diabetes development using the peptide concentrations of three proteins (hepatocyte growth factor activator, complement factor H and ceruloplasmin) in combination with the age of the particular child.The researchers are confident that the protein signatures they have discovered will be helpful as biomarkers for future diagnostics. "The progression of type 1 diabetes into a clinical disease takes place over a period of time that varies from individual to individual and that at this time is insufficiently predictable," explains Prof. Ziegler. "The biomarkers that we have identified allow a more precise classification of this presymptomatic stage and they are relatively simple to acquire from blood samples."Source: Eurekalert
www.ayushdarpan.com Dr Navin Joshi at NPAFc पर 23:42 No comments: