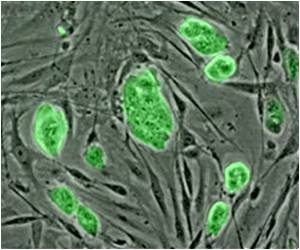 Scientists studying an aggressive form of leukaemia have discovered that rather than displacing healthy stem cells in the bone marrow as previously believed, the cancer is putting them to sleep to prevent them forming new blood cells.
The finding offers the potential that these stem cells could somehow be turned back on, offering a new form of treatment for the condition, called Acute Myeloid Leukaemia (AML). The work was led by scientists at Queen Mary, University of London with the support of Cancer Research UK's London Research Institute.
Around 2,500* people are diagnosed with AML in the UK each year, both young and old. Although AML is curable in some the majority die from this disease.
Normally, the bone marrow produces haematopoietic stem cells which mature into "adult" blood cells. In people with AML the bone marrow is invaded by leukaemic myeloid cells which aren't able to develop into normal functioning blood cells.
The result is that the body does not have enough red blood cells or platelet cells, which can cause symptoms of anaemia, such as tiredness, and increase the risk of excessive bleeding. Patients are also more vulnerable to infection as the white blood cells, which fight bacteria and viruses, are not properly formed.
Dr David Taussig, from the Barts Cancer Institute at Queen Mary, University of London, who led the research, said: "The widely accepted explanation has held that AML causes bone marrow failure by depleting the bone marrow of normal haematopoietic stem cells by killing or displacing them.
"However, we have found that samples of bone marrow in both mice models and patients with AML contain the same, or more, of these normal stem cells than usual. So the cancer isn't getting rid of them, instead it appears to be turning them off so they aren't going on to form healthy blood cells.
"If we can find out how the cancer cells are doing this, we can look at exploiting it to find ways to wake these stem cells up. This is very important as, while the cure rate for younger patients can be around 40 per cent, in older patients it is much lower. The treatments we have, such as chemotherapy and bone marrow transplants, just aren't very successful in this older patient group."
The scientists studied the levels of haematopoietic stem cells (HSC) in the bone marrow of mice transplanted with human AML. They found the numbers of normal mouse HSCs stayed the same, however what did change was that the HSCs were no longer going through the stages of development which finally results in the formation of new blood cells.
The findings were confirmed by the analysis of bone marrow from 16 patients with AML.
Professor Peter Johnson, Cancer Research UK's chief clinician, said: "Although major progress has been made in treating AML over the years, there's still an urgent need for more effective treatments to improve long-term survival. This study takes us an important step forwards in our understanding of what's going on in the bone marrow of people with AML, an area that we have not known enough about previously, and the challenge now is to turn this understanding into new treatments for patients."


Dr Taussig added: "Usually when the body is stressed, the stem cells become very active. For example, if you have a haemorrhage, they will jump into action to produce more new blood cells. The cancer cells are somehow over-riding this and our next phase of work will concentrate on how they are doing this."
Source:Queen Mary, University of London
www.ayushdarpan.com Dr Navin Joshi at NPAFc पर 18:55